Cheapmedia
Log in / Register Choose a city Catalog For Partners 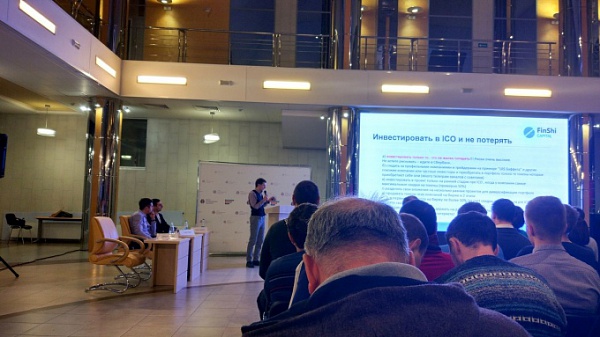 "Safe only in the savings bank." Tyumen experts told about investments in ICO and mining of crypto-currencies

ICO projects and crypto-currencies are now of interest to many Russians. Including those who want to have time to snatch their piece of cake and make money on it. Those who call themselves experts in the sphere, say that there are such opportunities.

Home cleaning will last for coffee

Can I still cryptic currency? Mining is prey. Like the digging of coal from mines, only the tools of the miners - computer power.

The first boom of universal interest in the crypto currency was in the beginning of the tenth years, and already then they asserted that it would not be possible to blame the state of the notorious bitcoins, because this crypto currency has no infinite emission. This did not stop the last year's excitement around the crypto-currencies - they took any equipment and, according to the director of IT-company "List" Sergei Rybtsov, they made something. In his opinion, it is possible to earn money by mining at home, even now, but, roughly speaking, for coffee.

"You can also use the CPU. But the video card does it much faster, that understood in 2009. What is characterized by video cards - they are more versatile than "Asiki", and with their help it is possible to extract many currencies, and not only those on whose algorithm the specialized equipment operates. Then there appeared special devices for mining, which only for this purpose are intended. But the same "Asik" houses are not mined - too noisy and hot. And on the video cards the farms are going, and if you live in another room, this is quite a normal option, "- says the entrepreneur.

There is cloud mining, when you lease the mining capacity, there is trust management when you buy equipment and install it on a large farm, receiving dividends. Nevertheless, mining is effective if it is organized as a business, Rybtsov believes. This is the maintenance of another level, and the uninterrupted operation of the farm, and quite a different income. In addition, sooner or later (the lecturer believes that it is too early), the crypto-currency market will be legalized, and private individuals without registration of a legal entity can not be engaged in mining.

"Today, there is no crypto currency in terms of the law," Rybtsov said. - For example, taxes on mining can not be paid even if you really want to. There are no prohibitions either. But President Putin instructed the summer to pass the law, and I think it will appear, presidential decrees are being carried out regularly. Crypto-currencies, most likely, equate to "other property". If you have a crypto currency, and it has grown, it would be nice to give the 13% to the state. Mining equated to business, most likely, private individuals will not be. As will be revealed, it is still unclear, but nevertheless. "

ICO project should be presentable

Blokchan - a popular word, ICO - fashionable letters. Many people are eager to sway the spectators' interest, so they hold conferences, lectures by newly-minted experts. But blocking is an algorithm, and ICO is a way of attracting investments, and the emotional background around these concepts does not change their essence. In the meantime, projects, whose financial structure is based on the principle of blockade, appear in Tyumen.

Tyumen's technopark was presented by Tyumen specialists on ICO and crypto-currencies, and the lecture gathered a decent number of listeners - these are those who are considering investing their money, and those who are thinking of applying such a scheme to their own project. The subject was told from the position of the authors of the ICO-project, who want to attract financing, investors, as well as the beginner, the crypto-currency.

Sarkis Jumayan, commercial director of Cheapmedia, spoke about how to secure his project with other people's money. First of all, he believes, it is necessary to conduct scrupulous preparatory work: to decide on the product, with the market (the product may be of interest in Korea and nobody needs it in Russia, for example). Then start looking for funding. These can be crypto funds, private investors.

There are a lot of channels for attracting investors. There are free and paid trackers that contain information about startups.

"The tracker is like a shelf in a supermarket, on which there are many different products," Jumayan compares. - The investor - as a buyer, passes, looks, if something has attracted, studies the composition, the expiry date. My recommendation: to place your project on at least forty channels. "

It is very important to find good so-called advisers - they are consultants and controllers in one person. According to Sarkis, the most successful option is the "profile" adviser, who himself works in the same sphere and understands the essence of the project.

It will be difficult to get through without promotion and advertising. Paid or editorial materials in the sectoral media, the dissemination of information in social networks and so on. Again, if you order advertising to a popular video blogger, he should be able to answer his subscribers about questions about the project. And to pay him better tokens of the company, and not by fiat money or crypto-currencies, so he will be interested in the success of the project.

Investor - he is a little and a private detective

The theme of the speech of Vyacheslav Sorokin, a partner of the FinShi Capital venture fund, was formulated roughly like this: how to invest in ICO projects in order to earn quickly and safely. The lecturer gave the expected remark: it is safe - in the savings bank. If it is an investment, it is in any case a risk.

"No one will ever recommend any free money to investments. Invest only what is not a pity to lose. The risk in ICO is the risk in the square. There is always a chance to fail. Even in a venture environment, nine out of ten projects die. Although they check everything that can be done, "says Sorokin.

One of the options to secure your investments is to monitor profile traders and companies. There are funds that do this - analyze projects, invest in them money and publish their own analysis. You can follow in their footsteps.

In general, it's very important to check and recheck everything, Sorokin assures, especially the project team. We should behave almost like a private detective on the surveillance: check all the social networks, understand what and how is reported on the progress of work, how many pages of the company subscribers, how many reposts, to study the reputation of developers and advisers, publications in the media. In addition, of course, it is necessary to investigate the market, which the project claims, to find out what problem the product solves, whether it is not intended, to look at the source code.

"Advisors are not a guarantee. They must also be checked. A good guarantee is the reputation of an adviser. If he has already worked on projects that have proved worthy, he will value his reputation, "- says the expert.

Some questions can not be answered independently. Do not be shy about asking questions in profile chats - now there are a lot of them, and there are literate people who can give advice.

As for the investment itself, it's best to invest in the preICO stage - you can buy tokens at half price, Sorokin says. After entering the exchange, he advises to sell half to "repulse" the costs, and leave the rest for growth - for a period of several months.